As a lash extension artist I use a ton of mascara wands which I cannot reuse. I do give my clients the wand I use on them, but they only want to many. They can accumulate quickly to a bunch of dirty old wands in your purse, car, or (like me) all over the bathroom. Nobody really thinks of disinfecting them for reuse. Why would they when they can get a new one each visit.

I was told about a non-profit organization that will take your old mascara wands and use them to save animals. Seriously, It's called Wands for Wildlife.

Wands for Wildlife is volunteer-run 501c3 nonprofit inspiring people to help wildlife and the environment through re-purposing discarded mascara wands. The organization engages people in ways to support wildlife rehabilitation efforts and encourages greater mindfulness of the impact from human activities, including the use of plastics, on the environment. - (wandsforwildlife.org)

Wands for Wildlife began as a program at Appalachian Wildlife Refuge.

The organization began back in March of 2017, when Appalachian Wild's Executive Director and Co-founder Savannah Trantham's asked over social for anyone who had used mascara wands to donate them so her team could comb fly larva and eggs off our furry and feathery animal friends in the wild.

This has grown into many other avenues to help the wild. Here's a list from their website of all the programs this has inspired.

I will be collecting all my mascara wands and sending them to this non-profit organization.  As well as, encouraging my clients to bring back the used wands to switch out for a new one to help cut down on extra plastic waste, and so I can donate them.

You can help by telling others about these programs or donating to them as well. Even if you do not get lash extensions you probably use mascara or know someone who does. It's feels good to know people like this are out there!

Let's help them do what they love, which is helping and preserving wild life.

He's the cute photo that was posted on social media asking for any used wands by Savannah Trantham . 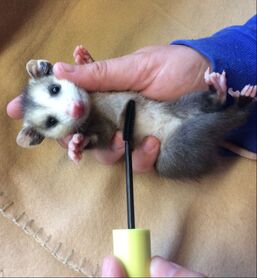